Skip to primary content
Skip to secondary content
Several months ago I rediscovered Mick and Dee Luvbight’s site just before going to my first OctRoperFest in Austin. (And I did get the honor to meet and chat with them briefly, and very much enjoyed their entertaining performance.) On their site, I ran across a striking tie attributed to Mark from DV8 House in Sydney.

The Luvbight’s had painstakingly taken about 60 photos of the tie and I’d been enamored with it since. I had once tried tying it casually at Temple and though close, it just wasn’t the same. After brushing up on the many subtle nuances, I was at The Element and was able to complete it. I met a nice lady there that we’ll call Jade, and she was willing to bottom for me. I was pretty happy with how it turned out and some of the photographers snapped off some quick shots too so I could look back on it and inevitably pick at it, but overall I’m happy with my first completion of it.
Enjoy. 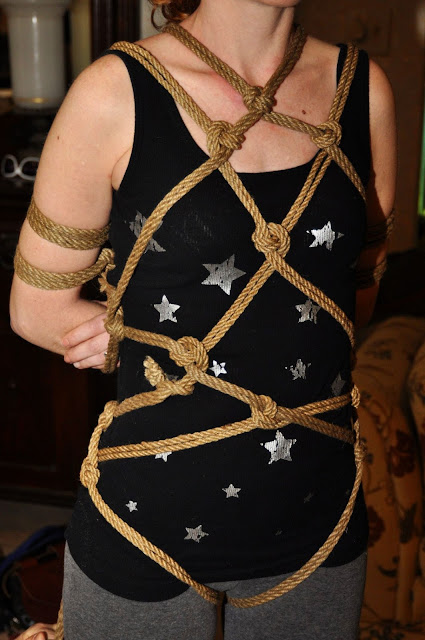 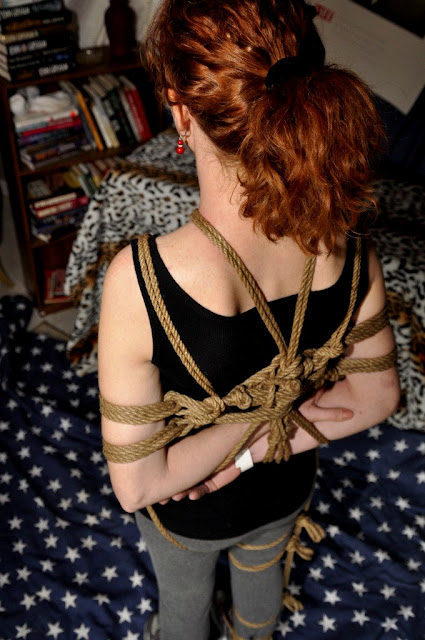 Stay knotty, my friends.
A new-to-non-bedroom rope fan I recently tied met, gave me a request for some custom dyed rope — teal to be exact. I was concerned about the color showing properly with the light brown jute so I did a test run and it seems to work. I discussed it with some folks before-hand, but there are so many variables, it’s just best to jump in and do an actual trial.
After letting it dry under tension I spun the yarns into rope at The Element’s Rope and Photo Social. I had a new rig for the rope machine and it worked great. My only problem was the nut driving the machine – me.  I spun the rope a little too vigorously, and it ended up coming out stiff. I’m learning the nuances of the machine and it’s moving and weighted tail, but it looks like it has a bright future ahead of it.
This week I’ll be dying yarns in earnest to make up three requested pieces — I’d forgotten how much fun it is to make rope!

Stay knotty my friends.
I received an invite to do a basic rope demo for The Element’s WTF 101 class a little over a week ago. I was honored to do so, and I got the opportunity to meet some new friends and new/old friends. Sky-Wahya was one of the new friends, and was kind enough to volunteer for the floor demo. She was new to rope outside the bedroom, and was all smiles during and afterward which is a good thing.
The demo consisted of a box-tie converted to an ebi, then later into a hog-tie. We did some light pain/pressure play as part of the demo, which consisted of pressure points with a bamboo pole. Some of these I knew from previous play, some I picked up from Boss Bondage’s classes (highly recommended if you get the chance.) The pressure play was fairly light though I did find out later she had round bamboo-sized bruises on each cheek of her tush, but that she was happy for the souvenirs!
Overall a great day, met new folks who love rope, and got to play a little. Oh, and I received a request for some custom teal jute (to be addressed in another post.)
Stay knotty my friends.

OK, it’s a new year and I’m about to hit my 1 year anniversary of my first bit of rope bondage!  Who could have thought it was only a year ago I attended that rope bondage class.  (Shout out to Lalia!)  One hogtie later and I was absolutely hooked.  OK, I was hooked before that, but the experience of the class confirmed it.

On to 2013 items.  I’ve been to a couple of gatherings, and I have a request for some custom colored rope – I haven’t done any dyed batches in a while and I admit I look forward to the challenge.  I’ve done a rope demo, met new faces at events, and am helping a new Austin rope group get off the ground.  I’m going to make some rope this weekend at The Element’s Rope and Photo social, and will spin up the teal dyed test pieces I made last night.  More to post in regards to that, and in regards to events unfolding in Austin.