Let it be known I’m a tinkerer – a family history of it, so that means I like to build and create.  My latest project is a rope machine.  I’ve been able to craft rope using a single power drill with success, but wanted to try something a little faster with possibly better and more consistent results.

There are several different ways to build one – I went with a chain drive system powering three sprockets.  Overall cost with shipping was under $50.  I built the case from scrap plywood and pine boards I had laying around which I’ve reclaimed.  The case is a bit different than others I’ve seen.  I wanted the tension on the chain to be adjustable for when it stretched. The upper portion of the case can slide up and down thus moving the top sprocket and tensioning the chain.  There are most certainly different ways of doing this – but this is what I came up with.

The case is of 3/4″ birch plywood – certainly strong enough for the task and overbuilt – you could go lighter I’m sure.  The front is secured to two side pieces. The top portion has full length “rails” which slide in a channel in the lower portion of the case.  The back panel screws into the lower portion and clamps the rails firmly in place thus setting the height of the upper portion and the chain tension.

I used #25 chain and sprockets from surpluscenter.com, along with some of their 5/16″ bearings.  The only other parts I needed were purchased from The Home Depot; namely some 5/16″ washers which are oiled and used as thrust washers, then three 5/16″ laundry line hooks which are the perfect size for this project.

Shown below are the first pieces of rope to come off the machine.  I had the hardest time with the ones made from straight up twine – I was over twisting them and causing them to break.  It’s a learning process and for certain different than the power drill method.  It has good potential for long pieces done quickly too – I’m excited.

Since the premiere play space in San Antonio has closed, there hasn’t been a good rope location for me of late.  I have a good roper friend in Austin who sometimes gets together with some of her friends and has a small party.  They’ve been kind enough to invite me along and I’d bring my tripod and we have a good time hanging about – happy bunnies, happy riggers.

My latest roping adventure took me to The Element, north of Austin.  It’s a private house and play party and they’re very rope positive – including some great trees in the backyard for natural suspension points.  Au naturel too if you’d like – who am I to judge?  🙂  Met many new faces and some old again – a great evening of conversation, rope, toy comparisons, and a few laughs along the way.  Recommended.

Below is a tie I did there with Sophie – she has some rope experience, but had never been suspended.  Not only did she want to be suspended, she wanted to be inverted; go big or go home I say.  If you think you’re ready to try, lets give it a go.   The tie was a basic TK, with the drum harness as the sole suspension point.  The ankle wrap is just to help support her legs while she’s upside down.  Aural support and photo by JakeKinbaku. 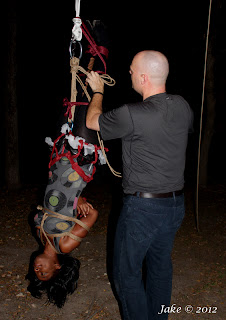 Well we all know how that phrase starts and there are several endings to it – I got to see one of them one night. Preface for those who don’t know me: I’m a new rigger as of a few short months ago. (Long time fan, first time roper) I LOVE roping and everything about it, and I knew it was considered Edge Play and after last night I know it. I witnessed and aided in a partial fainting, which for me is a big thing, a wake up call for certain.

(I’m not using names because I think it’s irrelevant to this piece and their privacy concerns.)

The rigger and model were both well known to me and I’d worked with them each previously. The rigger is quite experienced and unofficially my mentor, though maybe doesn’t know it. The model is very comfortable around rope and capable of handling strenuous ties. The tie last night started out with a full TK/box tie which I’ve seen her in, and have applied to her myself. Then halfway though the application of a gunslinger harness she indicated to her Top that she was feeling some tightness. I saw some adjustments being made then was distracted for about 10 seconds as someone started to move some equipment for another scene. When I looked up they were both over by the table trying to get rope off of her. I got up to help and the Rigger said “Cut if off” – I instinctively reached for my back pocket for my safety shears only to realize they were in my bag (I wasn’t the one playing after all.) So I grabbed my rigging knife from my front pocket and within 10 or 15 seconds between the Rigger with  sheers and my knife we had her out. Fortunately she didn’t completely faint and kept talking through it.

I carried her into another room to lay her down and get her circulation going again. Cold towels (she was hot), ice water and a fan and the care of her Top helped bring her back to her normal smiling self in a matter of minutes. Regular checks throughout the evening indicated she was fine.

I had some chats with the Rigger after everything calmed down and she reminded me again that it’s Edge Play – I knew that, but this helped confirm that. Fortunately the model spotted early signs of a faint coming on in that 10 second window when I was distracted, and that’s when the Rigger without hesitation moved to sit her down and start freeing her.

I’m not happy any of it happened, but I’m glad to have experienced it. In hindsight I’m going to try to keep the following in mind. Once I step into the dungeon, to keep my safety sheers or safety knife on my person whether I’m playing or not. Keep checking on my bunny throughout and to stress to them to let me know of ANY early signs of danger. An extra set of hands pre-arranged to jump in if need be is always welcome. All in all everything worked out well with the only casualty being the Rigger’s homemade rope. And as she said, “It’s only rope”, not people.

Have fun, and be safe out there!

One of the things I learned at OctRoperFest was to trust my gut more.  Yes, I consider myself a new roper, but I can still spot a potential issue, and should feel confident enough to speak up about it.

One of the riggers was setting up for a performance on a pagoda style freestanding suspension frame.  His ring was secured towards the the side of the frame, though it was centered in the other direction.  My first thought was I wouldn’t put it there and I had heard those type of frames can be unstable in a specific direction.

Halfway through the performance, with the gal suspended, he put extra weight on her in a pulling motion – which brought her closer to him and caused the frame to start to fall towards him – it was now up on two legs instead of the stable four legs.  I was at the end of 2nd row near the stage, and there were two fellows in black cowboy hats directly in front of me.  They both dove onto the raised stage grabbing a leg of the pagoda, and I went around them up the stairs grabbing the side of the frame.  The performers were unfazed and carried on with the excellent show.  Cowboy hat #1 stayed on the stage with an arm hooked into the rig ensuring it wouldn’t go over again, though it did raise the other leg once or twice. It might be a really good frame design, and I’m still thinking of building one like it, but you must keep the ring dead center.
.
So what did I learn – if I see something questionable contact a DM or somebody – even if it is a performance.  I have no idea if the performer is familiar with the nuances of that equipment or not. Just because I consider myself new doesn’t mean I can’t spot a potential issue. 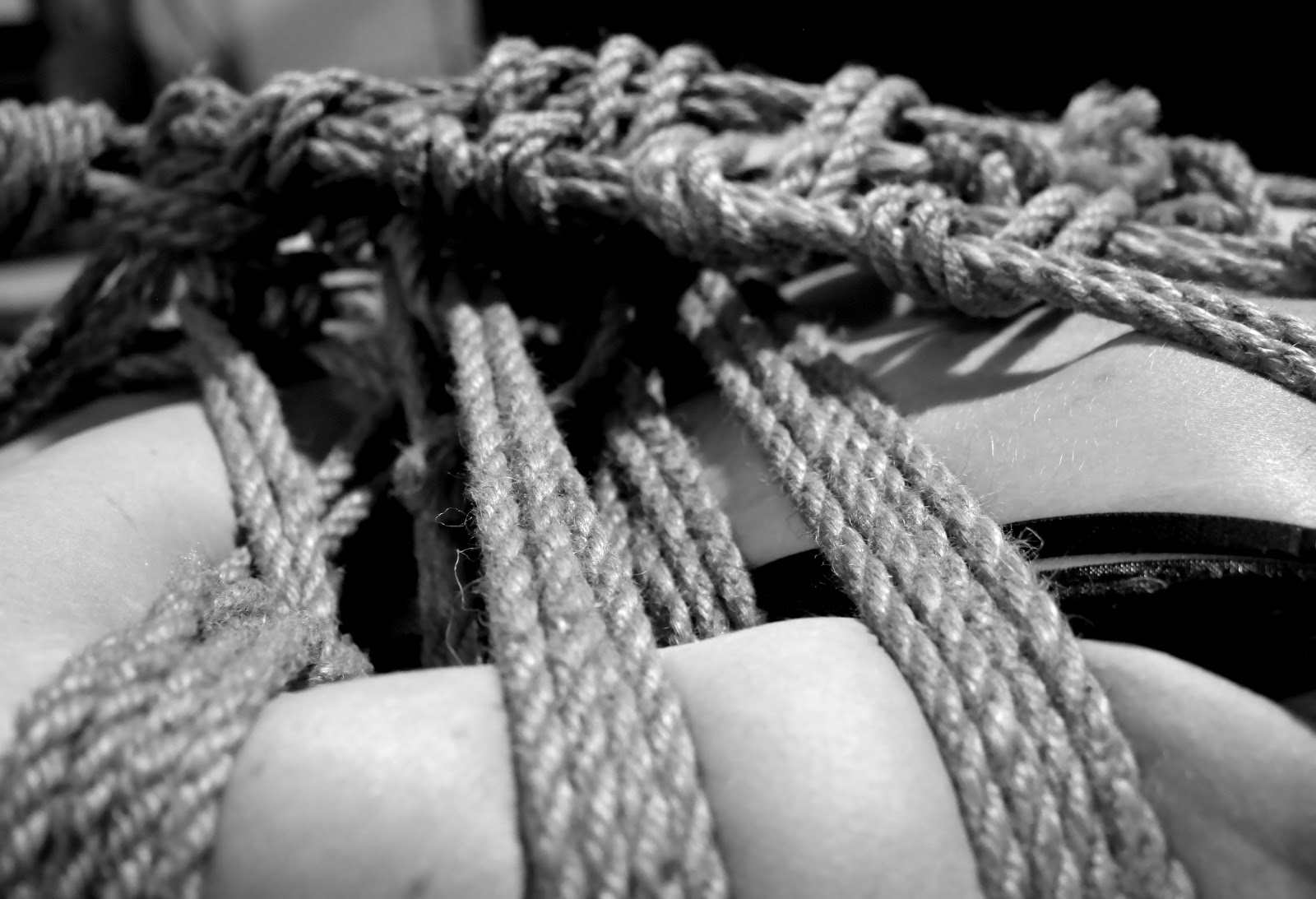 I’ve now had a chance to look back and reflect on what the highlights of my first major rope event were.

For certain the guerrilla bondage suspension was pretty darned awesome and the highlight for me.  I thank QuietSpot for volunteering to be tied in a TK and gunslinger, then be driven around in the back of a Suburban through Austin traffic with an itchy nose.   DallasKink’s classes were fun and informative enough to make us get out there and just do it.

I enjoyed the performances and getting to meet some folks I only knew from online (Mick and Dee Luvbight – very cool.)  Meeting CharlieB was a nice surprise too, as I didn’t know he was coming in from LA – he’s got a nice profile page btw.  I got to meet another rigger, Tyrus from New Orleans – hope to see him get in more ties at future events.  Mark Yu’s class was good – I enjoyed the armbinder class even if the initial cuff wasn’t always working.  It taught me above all to think and adapt; it’s my rope, my bunny, it might not always work the same as it does for others and that’s OK.  The Boss Bondage classes were good too – I’ve always enjoyed his classes even if I don’t necessarily do all he does – it reminds me that bottoms are pretty resilient and can take a fair bit when handled properly.

I didn’t know what to expect going into the event – next year I hope to make more of the events and bring more rope enthusiasts out to it.  Considering I’m in my freshman year of roping, I’m pretty happy with where I am, and have some ideas of where I’d like to be in another six months.  Good times.